This is the second post in a series on the history of French meal courses. The first was an overview of the subject. The next is on the roasts course.

The American phrase “from soup to nuts” codifies an idea that a formal meal has always started with soup. In France, this has been true just long enough to establish the concept, but not by any means for most of French history.

In modern French, soup, as a mainly liquid and usually hot dish, is known both as soupe and potage. The first term originally applied to a piece of bread put in the base of the semi-liquid dish originally known by the second – in English, "pottage". This referred broadly to anything made in a pot, most often vegetable or meat stews.

Thirteenth and fourteenth century French cookbooks and menus give no special role either to soups in our modern sense (a mainly liquid dish) nor to “pottages”. The Menagier de Paris lists menus for various meals without giving any special place to either. The only possible exception is in two menus for weddings – that is, very formal meals. The first lists under potages capons in blancmanger, with pomegranates and candied spices on it; in other words, not at all a liquid soup, but a thick semi-liquid dish. The second, after dishes of grapes and peaches or small pies, again lists as "pottages", civets, four hares and veal; or capons again in blanc manger. Neither of these is a soup in our modern sense, but at least the base word begins to peek through as an element in the start of a meal.

In 1563, a statute referred to the first of three services as "entrées" and included potage, along with fricasée and pastry, as one type of these. Rules for a convent in 1641 refer to "pottages, or other first dish". Furetière (1702) says that pottages are served at the start of the meal, defining them as “cooked meat juice, in which one soaks or simmers bread cut into small slices." A model meal in a cookbook from 1729 includes two pottages, one a bisque, for starters, but also a piece of beef with garnishings. A more general idea appeared early on involving liquid dishes; that is, that the boiled food (often meat) would be served first: “In France the boiled is served before the roast, in Spain, the roast before the boiled.”

For starters, La Cuisinière bourgeoise (1748) lists two pottages, but again a piece of beef and also hors d'oeuvres. Les soupers de la Cour (1755) offers various menus, some with pottages included in the first service, some many other items. But the Don de Comus (1758) starts most services only with pottages. A dictionary (1762-64) defines entrée as “a sort of dish served immediately after the pottage”.

Interested in the history of the food of Paris? Visit the Paris Food History site.

And so after the middle of the eighteenth century we begin to see the pottage offered as the standard opening dish. This bring us towards 1767, when the first restaurant opened (originally mainly selling "restorants"). It would take several decades for this eccentric institution to meld with the pre-existing traiteurs and become the elegant, full-service institutions which would only actually be called "restaurants" in the nineteenth century. The first actual menu we have for such an institution was preserved in 1803 by Francis Blagdon, when he transcribed the complete menu for Beauvillier's very popular restaurant. This menu begins with a number of pottages.

As it happens, Beauvilliers himself produced a cookbook in which he provides recipes for most of the dishes served in his restaurant. This begins with recipes for bouillons (used in most pottages) and pottages. The recipes outline dishes which, if largely liquid, remain substantial. And so the nineteenth century begins with the potage as the first course on a standard menu (as shown by other menus as well), but that pottage still being a more substantial dish than the soup we imagine today.

In 1828, Carême wrote "the soup, in the whole of a good dinner, must hold the first place.... the soups [sic] must be considered as the agent provocateur of a good dinner."

When Van Gogh sketched on the side of a menu from a Bouillon in 1886, that menu still began with potages.

With the occasional exception of oysters, the pottage course – which increasingly became a true soup course – remained the first course all through the nineteenth century. Then suddenly, all at once, in 1900 one begins to see it change places with the hors d'oeuvres course, which, labeled or not, becomes the first course on most restaurant menus through the twentieth century. (With, again, the occasional exception of oysters). 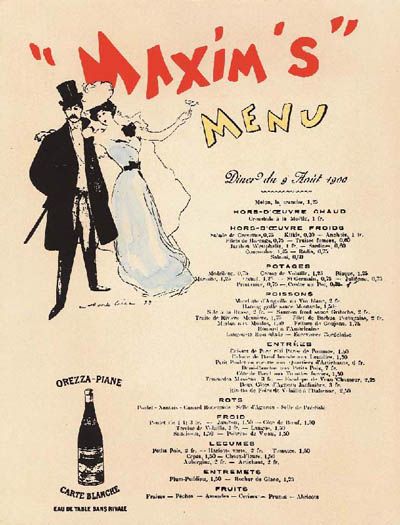 This remained the case through the twentieth century, when restaurant meals typically began with an hors d’oeuvres course (though not always labeled as such). Today, that is more typically referred to as an entréés course, followed now by the plats. When soups appear, they are no longer set off as a separate course.

And so in practice the soup course – long the potage course in French – only began a meal on its own starting in the mid-eighteenth century and going through to the end of the nineteenth. At that, it had a different meaning than today’s, not by any means implying a fully liquid dish. To the degree that it echoes French practice, the phrase "from soup to nuts" is essentially a nineteenth century concept, not by any means one with a long history.